There is an enormous ecosystem of search activity happening around mobile app discovery, but there appears to be a  disconnect in marketing strategy when it comes to using Inbound Marketing channels to drive mobile app installs. When it comes to search, a lot of attention has been given to App Store Optimization (ASO) to optimize apps for search inside of an app store. In all fairness, this channel has presented significant opportunity, but too often, major players in the mobile space are treating mobile and web as independent of lines business, instead of leveraging search demand on the web (a traditional Google search) to drive traffic to a mobile application. More often, they’re using paid channels to drive discovery.

Some of the primary channels outside of the app store for driving app installs:

Many publishers use tactics like email lists and social to maintain and nurture a growing base of mobile consumers. These are highly effective at pushing audiences around to new apps, but many businesses still heavily rely on ad networks, incentives, and cross sells to acquire new users. Others may rely on PR, review sites or a hopeful featuring. If everything aligns, you may be able to get into top listings, driving organic awareness and driving down cost per install.

And while some app developers have looked into organic discovery through ASO, many are ignoring classic SEO to capture demand that exists in Google. This leaves a lot of opportunity, because users acquired from search are typically highly targeted, carrying some of the highest monetization ratings. The cost model for acquiring from search is also effective, driving down the cost per install over time.

The Disconnect in App Discovery

Outside of ad networks, a lot of app discovery is still dependent on navigation inside of the app store ecosystem. Source: Standing Out in the Sea of Apps Mozinar

Less than 20 percent of discovery is being generated from search/referrals outside of the app store. In a world where search can drive 30% to 70% of traffic to sites on the web, I suspect this is due to a disconnect (and from my experience, it’s proven itself to be). Search is responsible for 20% not because it only holds 20% of the demand, but because it’s under invested in as a channel (similar to the PPC vs. SEO demand disconnect).

This is better represented by comparing the relative value vs. volume of different channels. When it comes to user quality, search outperforms all paid channels and outperforms social in most cases. However, it’s responsible for a tiny portion of installs by volume (4%). I find it concerning that social platforms, like Facebook and Twitter, however large they are, drive 5.5 times more installs than search.

Is ASO Losing Its Effectiveness?

Over the last year, companies have seen value in implementing basic ASO. This is because, like the early days of SEO, few competitive apps were taking the time to research and optimize for keyword search. However, the landscape is changing  What happens when all major apps in a niche implement ASO? The competitive advantage is lost as keywords become more contested.

When this differentiation by optimization becomes a level playing field, rankings fall back on usage and download metrics. The question will then become: how do we drive more installs outside of the app store? For many, this means increasing spend on ad networks.

This situation is approaching.

Source: Have you changed your app title yet? by MobileDevHQ

The number of apps using some form of ASO has increased 3X in 2.5 months. The competitive advantage of keywords in titles is going away in some markets as it becomes a requirement to compete.

This can be seen in its reduction in effectiveness. Over time, the search mechanics for app discovery will become more sophisticated  It’s likely that app search will not stay verticalized. General search engines, like Google, may move into this space more. They already have an application search that is effective. They could more easily implement factors like reviews, sentiment, link analysis, content analysis and authority. In the case of the iOS App Store, they lack factors like downloads, on-going usage, uninstalls, in app purchases, and revenue. However, as the app market place grows, the need for more sophisticated discovery and search will grow. If search in app stores becomes more sophisticated, then ASO will become ever evolving like SEO.

Capturing the Demand from Web Search

Huge opportunities for mobile apps still exist in SEO. I wrote a post a few months ago about a simple tactic that lead to a seven figure increase in revenue. It looked like this.

This came from driving organic search traffic to mobile apps after discovering areas of opportunity both us and our competitors were ignoring.

The tactic was simple:

Where is the Opportunity?

In short, a lot of places. However, there are some apps genres that are more profitable than others. My experience is in games. 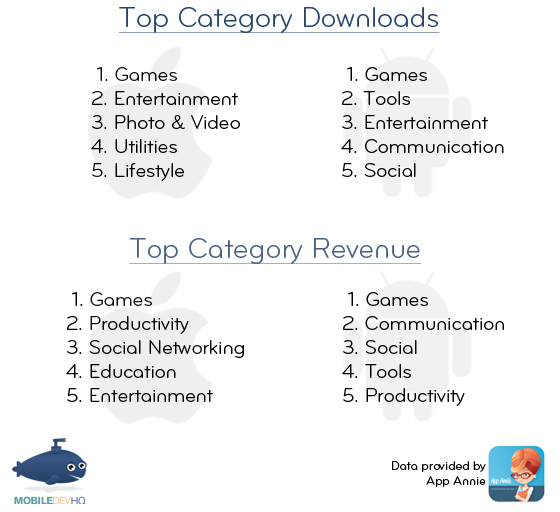 Source: Apple vs. Android: How Have They Compared in 2013? by MobileDevHQ

When doing keyword research some of this opportunity is easily missed. Keep in mind that tools like Google’s Keyword Tool provide estimated values as a 12 month average. This hides areas of opportunity in markets that are rapidly growing. 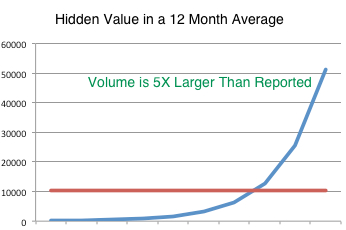 This is important to note when mobile app markets look like this.

Many of these verticals are relatively uncontested.

In both of these examples, there is an opportunity for an app developer’s website to rank in the top three results. I’m giving specific examples that include mobile terms, but these type of opportunities exist on broader terms as well.

These are the types of opportunities that have 6 and 7 figure annual revenues behind them.

Over time, I expect mobile app search will become more complex as we better understand the relationship between the different ecosystems. At the same time, improved conversion tracking, through tools like HasOffer, will help us better understand traffic – even though mobile conversion tracking has a way to go before it works effectively for web SEO. However, even without complete clarity, there is a lot of opportunity for mobile app developers to leverage inbound marketing strategies to drive awareness, installs, and ultimately more revenue.

4 thoughts on “A Disconnect in App Store SEO: Going Beyond ASO”